This authentic sofrito recipe is a mixture of onions, peppers, garlic, and herbs blended in a food processor or blender until smooth. An uncooked puree that is used in Latin American and Caribbean cooking.

You can use this sofrito blend for making stews, Cuban black beans, soups, or congri.

What Makes This Sofrito Recipe So Good

How To Make Authentic Sofrito

Begin by washing all of the produce. Place all of the ingredients in a food processor or blender and blend until you reach the consistency you prefer. Refrigerate for up to 1 week or freeze for up to 6 months.

What Is The Difference Between Sofrito And Recaito?

It all depends on who you ask. Some people will tell you that sofrito is a red-based uncooked sauce while recaito is an uncooked green-based sauce. My grandmother’s sofrito always looked green, so I always make my sofrito with green veggies and herbs.

Try These other Recipes With This Sofrito Base

Tried this recipe? Please leave a star ⭐️⭐️⭐️⭐️⭐️ rating in the recipe card below and/or a review in the comments section further down the page. And consider following me on Facebook, Instagram or Pinterest! 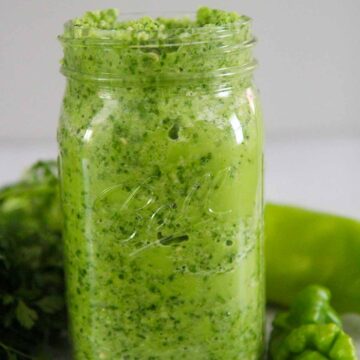