These caramel apple cinnamon rolls are filled with butter, brown sugar, apples, and caramel sauce for a warm fall breakfast or dessert. Tender and fluffy, they’re baked to golden perfection and topped with extra caramel!

As soon as the weather begins to cool, I find myself craving warm homemade cinnamon rolls, and I know I’m not the only one! There’s just something so cozy and comforting about their fluffy layers of dough and sweet topping.

Can I use a different yeast?

Sure, just be sure to check the back of the packet as the timing for rising and baking may vary.

Can I still make these caramel apple cinnamon rolls if I don’t have a stand mixer?

Yes, if you don’t have a stand mixer available, feel free to mix the ingredients together by hand. Once combined, skip adding oil to a bowl. Instead, knead the dough on a floured surface until it is tackey and well combined, adding extra flour as needed. Then, continue to form the individual rolls as the recipe card states below.

Why didn’t my rolls rise?

The most common reason why cinnamon rolls fall flat is because they weren’t warm enough. If you find the dough isn’t raising, let it rest longer to give the yeast a chance to activate. Also, be sure to use fresh yeast, and triple-check the temperature of your milk to ensure it isn’t too hot.

Tried this recipe? Please leave a star ⭐️⭐️⭐️⭐️⭐️ rating in the recipe card below and/or a review in the comments section further down the page. And consider following me on Facebook or Pinterest! 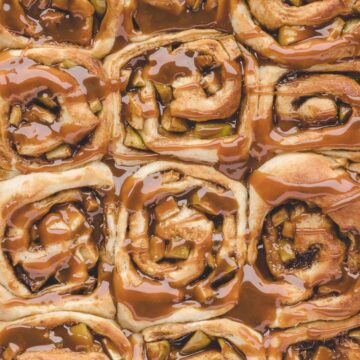 The rolls without caramel sauce, aren’t too sweet. If you like them extra sticky and sweet, you’re going to have to serve them with extra caramel!